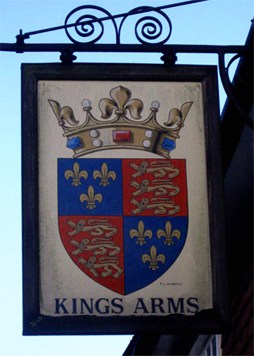 Wind the Great British history clocks back to the 16th Century and you would have noticed a fair few pubs, inns and taverns with Roman Catholic sentiment titles; “The Lamb” a representation of the innocence of Christ (the Lamb of God), “The Ark” a nod to Noah’s nautical challenge, “The Cross” a symbol of the crucifixion of Christ and a way-point sign for pilgrims and soldiers heading East to Jerusalem. These were historic references to symbols of the holy crusades (1096-1204) and an earlier religious-militarist Britain.

In 1533 Henry VIII was the charismatic, educated king of the day, famous for his trail of destruction through the female population in a quest for an heir to his throne. It was due to his second marriage that the king incurred the anger of the Pope. Still married to Catherine of Aragon, Henry also attempted to marry Anne Boleyn but the marriage was annulled. In 1534 the Pope ex-communicated England from the Roman Catholic Church because of Henry’s marital affairs. It was no bother to the king though, Henry set up his own church, the Church of England, and assumed himself the title of supreme ruler. In a show of allegiance to the Kings decision, and perhaps so as to not fall ill-of-favour with him, many pubs changed their names, or adopted monarchy associated titles, such as “The Kings Arms”.

”The Kings Arms” literally means, the King’s Coat of Arms, essentially the kings logo. Emblazoned upon his shield in the heat of battle, if you saw the king’s logo you’d instantly know whether to capture its wearer for ransom, or give your life to protect it.

“The Kings Arms” continues to be a very popular British pub name, commemorating Kings of Britain since Henry VIII’s reign. No doubt when Britain receives a new king some pub landlords will continue the patriotic, royalist British custom of celebrating the monarch by reflecting it into their pub name.

Other pub names that Henry VIII is said to have influenced also include;
“The Bull and Bush” celebrating his victory at Boulonge, or “Boulogne Bouche” as it was known. Some pubs named “The Greyhound” were a reflection of Henry’s love of greyhounds, as well as keeping them for sport he had a variation of the royal coat of arms displaying a white greyhound as a charge.

“The Kings Arms” is number 10 in BITEs most popular pub names (2011) with 203 pubs in our database using “The Kings Arms” in their title, another ambiguous fact is that during the writing of this blog-post without any influence by us, our most popular pub page based on views yesterday (16/08/2011) was The Kings Arms, Waterloo – BITE users are all in agreement this is “a gem of a pub”.
We’ll be discussing the origins of the other 9 most popular pub names in weekly posts, so stay tuned.  If you’ve got any comments feel free to leave them in our comments section below, or join in the conversation on our Facebook page.