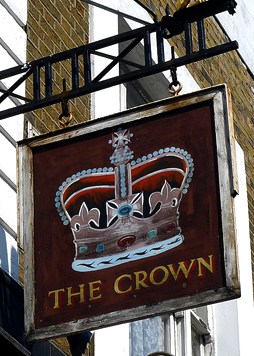 You might be thinking you’ve already got this one already worked out, “The Crown Inn” surely means a hat-tip in the general direction of the reigning monarch, and to some extent you’d be right in thinking that. But where did the name “The Crown Inn” originate from. Well, in the 17th Century, England was in the grip of civil war (1642–1651). Royalist ‘Cavaliers’ – loyal to King Charles I are fighting against the Parliamentarians ‘Round-heads’ loyal to Oliver Cromwell. Cromwell was successful in capturing King Charles, who was then tried and executed while his son Charles II escaped to France. Cromwell disposed of the power of the monarchy over England and assumed power as Lord Protector in the first Commonwealth of England.  Cromwell, a deeply religious man or ‘Puritan’ – abolished many types of recreational fun, fashion, sports, and even Christmas (Puritans found no justification for celebrating Christs birth despite being Christian).

Cromwell’s glum reign however, was to be a short one, just 5 years after taking power in 1653, Cromwell died in 1658. Despite being mentally capable, Cromwell was known to be physically drained suffering from constant bouts of sickness and fever.  His death plunged an already subdued and mournful England into deeper depression. Now without a leader and in political turmoil England needed to rise again.  This came through ‘The Restoration’ of the monarchy in England and the return of Charles II from exile who took to the throne on 29th May 1660 – also known as Royal Oak Day, and there are the origins of “The Royal Oak“, another Great British pub name.
Charles II was known affectionately by the people of the time as the Merrie Monarch because of his liveliness and hedonism, his return to the throne lifted England’s spirits and in celebration of their new king – pubs, inns and taverns used the name “The Crown Inn” as a symbol of their allegiance to the restored monarchy and with it a new sense of creative freedom was given to the country.

Despite the later years of Charles II’s reign being blighted with the Black Death (plague) of 1665 and the Great Fire of London 1666 in which both Charles and his brother James joined fire-fighters and managed the fire-fighting effort, Charles II was a successful well liked king of England.

‘The Crown Inn‘ is number 9 in our ‘Top 10 Pub Names in the UK‘, and it’s a fitting name for any pub to show their support for the country’s monarch, but spare a thought for Charles II, his influence in this pub name is dutifully deserved.

If you’ve any comments feel free to leave them in our comment section below, or join in the conversation on our Facebook page. Cheers!