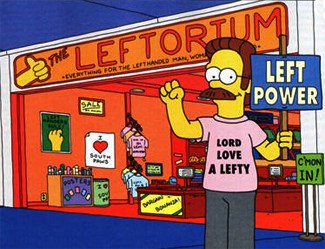 It’s predominately a right-handed world we live in,  many of us ‘lefties’ have been persecuted by sinistrophobia* at some point in our lives, either by people or by design and manufacture. If you’re one of our many BITE readers who is naturally left-handed, this coming Saturday (13th August) is your day to hold your left-hand up high and be counted as we celebrate ‘National Left Hander’s Day 2011’.

Get down the pub, demand that the barman serve you a pint in a left handed pint-glass, stand at the bar drinking from your left-hand and intrigue your friends with your knowledge of left-handedness.

(*Sinistrophobia – the fear of left-handed people.)

If you’re left-handed or you know a left-handed fact, you can leave a comment in our comments section below, or by joining in the conversation on our Facebook page.