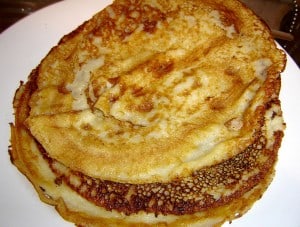 This quick and easy recipe substitutes the milk in your regular pancakes for beer. Beer pancakes are light and moist with a distinct flavour. For the best results make your pancakes American style, adding slightly more mixture to the centre of your frying pan instead of the traditional thin pancake we Britons like to eat on Shrove Tuesday.

Before you start, the best type of beer to use in this recipe is a pale, less carbonated (the flatter the better) beer. Of course feel free to experiment all night with different beers and pancake recipes until you find one you love.

These pancakes taste great served with a sliced banana and drizzle of golden syrup / maple syrup or Nutella.
Keep it simple by serving them with lemon and sugar, the bitter lemon really compliments the yeasty flavours.
Serve with melted dark chocolate and cream for a rich taste.
If sweet is not your style, serve with some smoky bacon and crisp lettuce for a  savoury alternative.

Are you making pancakes this Shrove Tuesday 2013? Feel free to leave a comment in our comments section below or join in the conversation on our Facebook page.

Does your missus drink of the ale? 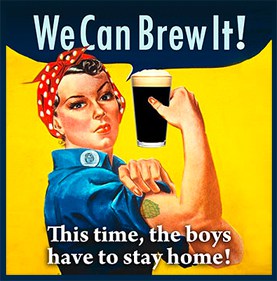 Do you catch your good-lady gazing at your pint whilst she sips at her fruit based cocktail? Does she want to partake in your ale, but feels too shy to ask? Does she long for her own pint, but doesn’t want to be seen drinking one?

It’s a question that has been asked before but, could women be a part of the renaissance that the pub and real ale trades are looking for?

With micro breweries recently experiencing a lot of interest and growth, the real ale industry has enjoyed some gathering acclaim for brewsters within the business. Waen Brewery founder Sue Hayward has seen demand for award winning Waen beers rise year upon year. Sara Barton, founder of Brewsters Brewing Company reminds us of the long history between women and brewing, up until the 1600’s brewing was primarily a woman’s business. Alex Heeton and Zara Hale, of BrewDog Camden regularly produce interesting home-brews with a creative understanding of the brewing process. Although there are just a few female ambassadors being pushed into the lime-light, there is still plenty of room for more women within the industry. Women have been historically good at brewing, it’s time they were invited back on a grander scale.

The pub industry however is constantly under threat, CAMRA are reporting that pubs are now closing at the rate of 18 per week, with the trend of closures set to continue if not increase. On a brighter note though, since the smoking ban there has been a steady increase in the number of women pub-goers.

UK accredited beer sommelier Sophie Atherton in Cask Matters (Nov 2012) reminded licensees that around half of their potential customers are women. She also outlined some suggestions and techniques pubs can use themselves to help expose real ale to women in a more positive light.

Atherton suggested that the process starts with the equipment. Keeping your pipes clean and maintained isn’t often easy, but it is absolutely essential to maintain a level of consistency and pride over your beer selection.
She also asks licensees to consider the psychology behind attracting women to real ale.

Pubs should avoid advertising sexist pump-clip imagery and perhaps broaden their range of beers from just masculine names such as Spitfire, Mutt’s Nuts or Seriously Bad Elf, to embrace a softer selection that potential female customers can feel a connection to, such as Strawberry Blonde, Chocolate Orange Delight or Banana Bread Beer. It may seem patronising, matching flowery and flavoured names to female drinkers, but by introducing flavoured beers into the selection, licensees continue to dispel the myth to both sexes that all ale tastes the same, one enduring stigma that the drink has acquired. Who knows, if it’s on offer, perhaps even the bearded, port-belly, sandal wearing stereotypes may try a Cherry Fruit Beer after a long days rambling over the hills?

Then there’s the sales pitch, it’s proven more likely that women will sample real ale if it is suggested to them by a female member of staff. Women like to know the honest opinions of other women. Offering alternatives to their regular tipple could be the way. Red wine or coffee drinking women might like to try a porter, stout or dark beer. White wine drinkers may prefer a citrus or fruit beer, and sparkling wine drinkers may prefer a blonde more carbonated, citrus beer.

Lets continue to support the British pubs by by making 2013 the year we make an effort to share the ale with the women in our lives, and with Valentines day just around the corner, treat your missus to a pint down the pub, it’ll be an experience she’ll cherish and never forget. Cheers!

Does your missus partake in the ale? What is her favourite pint? If you’ve a comment feel free to leave it in our comments section below, or join in the conversation on our Facebook page.