“It’s the big one folks!” Organised by Cask Marque and with support from CAMRA, Britain’s “National Cask Ale Week 2012” is almost here. The event, running from the 28th of September until the 7th October promotes Real Ale to those who have yet to try one the many, many varieties of Real Ale now available. It’s also a time for pubs to show some solidarity towards Britain’s national pub drink.

There are a lot of national events going on during the week, from Real Ale tasting sessions, to brewery tours, cellar tours, new beer launches, beer festivals, food festivals, competitions, a real ale trail and let’s throw some Morris Men in there too! A full list of the details of the events can be found on the Cask Ale Week website. There’s almost too much to do, thank the beer-gods that National Cask Ale week is in fact a 10 day affair spanning two weekends.

For the upcoming celebration BITE recommends:

Visit to one of these 5 Fullers pubs where the expert award winning Cellarmen will give you a glimpse into the science (and love) it takes to serve consistent beautiful beer;

Greene King are supporting National Cask Ale Week 2012 again this year with the “try before you buy” scheme in operation in 300 of their pubs.  If you fancy a pint of real ale, but can’t decide which is your tipple, just ask one of the bar-staff for a sample. More information on the “try before you buy” scheme can be found on the National Cask Ale Week website.

If you’re in the Cornwall area, head off to the St. Austell Brewery on Wednesday 26th September, Sophie Atherton, Britain’s first beer sommelier will hold a tutored beer tasting from 1pm at the Visitor Centre, you’ll have the opportunity to sample some of the famous St. Austell signature ales as well as some new brews featuring just for National Cask Ale Week. Tickets are just £1 per head, and there are competitions and prizes on offer once you get there, for more information and a chance to meet the First Lady of Beer visit the St. Austell Brewery events page.

Good olde’ Punch Taverns are giving away free beers, all you have to do is buy the Daily Telegraph on Sunday 23rd September for your free pint voucher, so do look out for this free beer promo!

If you have any tipson a first ale for an ale-virgin to try, or would like your say on the National Cask Ale Week 2012 you can leave a comment below or join in the conversation on our Facebook page. 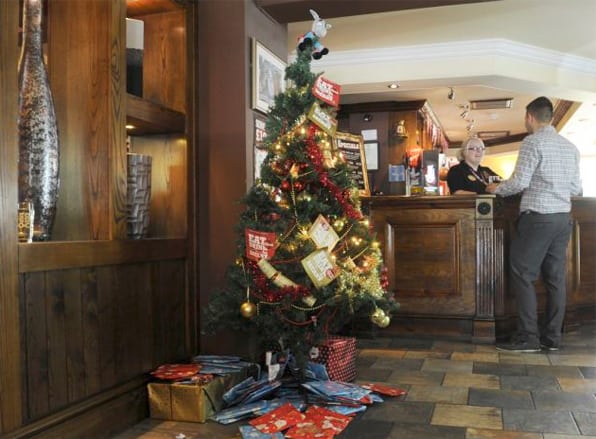 “It’s Chrrrristmas!” Say that in your best Noddy Holder impersonation… Yes BITE readers, with just 110 days until Christmas The Wylde Green, Sutton Coldfield have already gone into their attic and dusted off the tinsel. With the tree and decorations now up, The Wylde Green opened it’s doors on the 26th August with a rather festive affair and punters queued up to get a taste of Christmas 2012. Turkey dinner in your flip-flops and shorts, can you believe it?!

Lisa Evans, assistant manager of The Wylde Green, in a statement to the press said “It’s all to do with getting our bookings for Christmas, to be fair. We like to get it up early to explain what we have got going on and get as many bookings as we can. ‘It’s going all right at the moment, we have got quite a few.”

The Wylde Green, owned by Greene King and part of the Hungry Horse pub chain have confused locals with the stunt, Lisa Evans commented “they think we are a bit mad to be honest.” She even admitted herself  “it is a bit early isn’t it?” Greene King spokesman Greg Gibbons said: “When a customer realises it’s just four more pay days until Christmas it brings it home how close we are.”

2012 has been a belting year for us Brits, with the Royals spear-heading our celebrations showing the world just how great we can be as a nation, we’re draped in Olympic Gold and proudly flying the flag once again. “Ooo, I could snap a match,” why shouldn’t we celebrate Christmas early? So, are you ready to invite nan round? Put on silly hats and loosen your belt? Or is this all just a bit too early for you?

Let us know your thoughts in our comments section below or by joining the conversation on our Facebook page.