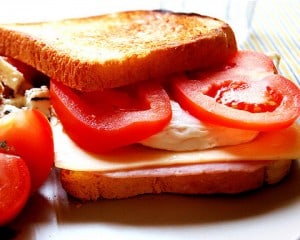 It’s British Sandwich Week, 16th – 21st May! Earlier this month we asked our readers to comment on their Favourite Pub Snack, it was no surprise to hear that crisps and pork scratchings came out on top,  what was surprising was the lack of votes for “sandwiches”… These bastions of snack were unrepresented in our poll, even though there are an estimated 1.8 billion sandwiches sold in the UK each year, in a market worth almost £3 billion annually.
So, let’s get out there and raise our sandwiches high, and show some support for Great British Sandwich Week 2011!

You may have heard the  legend that John Montagu, 4th Earl of Sandwich asked his valet to bring him meat tucked into two pieces of bread so that he could continue to play cribbage without getting his cards greasy (hat tip to BITE user Alan Williams).  People saw what the Earl was eating, and they requested “I’ll have the same as Sandwich” the phrase was whittled down and forged into the name we know today. While this story is true, the Earl of Sandwich is not credited with the invention of the ‘sandwich’.  The British have been eating meat and cheeses with bread since the stone age.  During medieval times the first instances of dining plates were made from large pieces of rough, sometimes stale bread cut into thick slabs called ‘trenchers’. Food was served on the trencher and at the end of the meal – either consumed by the diner, or more popularly given to a family dog or a local beggar.

The sandwich remained in the realms of aristocracy as a fancy food until the industrial revolution in the 19th Century, where it was taken up by the working class as a cheap portable meal for many workers.  From then onwards it’s place on the British menu was forever concrete. Despite attempts to change it’s design with foreign influence the basic sandwich has long since comprised of two pieces of bread plus a filling or fillings, square cut or triangle cut.  Cheese has been the historic British favourite filling, until recently where chicken is currently the nations favourite sandwich filling.

Did you know?
It was the Fool’s Gold Loaf sandwich that killed Elvis.  A single warmed loaf of bread, sliced, part hollowed, and filled with one jar of creamy fried peanut butter, one jar of grape jelly, and a pound of bacon, this calorific monster of a sandwich of course – supposedly attributed to ‘the Kings’ heart failure.
The sandwich that killed R-and-B singer Luther Vandross,  known as ‘the Luther’ is doughnut shaped brioche cut in half with two types of fried chicken, bacon, buttermilk and pecan nuts.  It’s a very popular sandwich in America too, despite being an artery clogging masterpiece.
“The Millionaire’s Cheese Sarnie” created in Britain, by Michelin chef Martin Blunos, as the name suggests, is the world’s most expensive sandwich you can buy.  Made from sourdough bread and cheese blended with expensive white truffles, dressed with 100 year old balsamic vinegar and gold leaf it costs around £100 per sandwich, it’s not much bigger than a regular sandwich by the way!
Golden Palace Casino purchased American singer Britney Spears half eaten egg salad sandwich from internet auction site ebay.com for $500 (£308) in 2009, to add to their collection of bizarre memorabilia which also includes the grilled cheese sandwich with the effigy of the Virgin Mary toasted into it – which was purchased for $28000 (£17280) in 2004.
The worlds longest sandwich measured 634.50 m (2,081 ft), created in Britain by Italian Pietro Catucci in 2004.

Do you know of a pub sandwich that is worth mentioning? Have you yourself created a master chef worthy sandwich that you have been keeping secret until now?  Have you ever looked across the pub table and thought “I want that sandwich!” Do let us know on our Facebook page, or in our comments section below – and thanks for all your input, we do read everything!