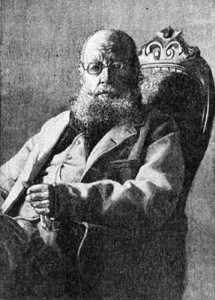 It’s a funny one today, we’re already knee deep in doughnuts thanks to National Doughnut week, but this particular day (12th May) is National Limerick day, celebrating the birthday of Edward Lear (1812-1888) the author of “Book of Nonsense” published in 1846.

Edward Lear was the 21st child of Ann and Jeremiah Lear born in Holloway, he suffered from epilepsy, asthma and breathing problems as a child, although he still maintained a good sense of humour which became his most notable trait. Unfortunate then that during the 19th Century, epilepsy was considered to be a form of demonic possession and Lear struggled with the embarrassment that this bestowed upon his family name, often falling into deep depression which he referred to as “The Morbids”.
Later in life Lear left his family behind and travelled widely finally settling in Sanremo, North West Italy.  Lear would introduce himself as “Mr Abebika kratoponoko Prizzikalo Kattefello Ablegorabalus Ableborinto phashyph” or “Chakonoton the Cozovex Dossi Fossi Sini Tomentilla Coronilla Polentilla Battledore & Shuttlecock Derry down Derry Dumps”.  These long winded names are taken from a parlour game of the time, and show how ingrained Lears love of language and word play had become.

A Limerick is a humorous verse or poem. It is five lines longs. It’s name comes from the city of Limerick, Ireland, although it’s unclear if Lear himself ever visited the city, the first two lines rhyme with the fifth line, and the third and fourth lines rhyme, the fifth line being the conclusion to the previous four lines.

Abbey Ale by Nitelaf
Abbey ale’s what we brew here, we Trappists.
(We’re in Belgium, for all of you mappists.)
Strong and rich, full in body;
As sweet as a toddy.
I’m glad that we’re brewers, not frappists.

A Frappist is a person with Red hair according to Urban Dictionary, but it’s possible the author meant frappist as in a person who drinks ‘frappachino’, an iced coffee.

And here’s another example from us;

Beer in the Evening by Anon
Another blog post is here
This ones about Edward Lear!
For BITE, I’m out of love,
This isn’t about pubs!
Nonsense about dead poets, get to back the beer!

Edward Lear was born in Holloway, London where (surprisingly) “The Edward Lear Hotel” now stands.  If you are in the area you might want to pay a visit to the Prince Edward, The Coronet or Shillibeers Brasserie Bar.


Have you got a Beer in the Evening Limerick, a real ale limerick or even just a plain old limerick ? (Obscene “Man from Nantucket” Limericks will not be published unfortunately.)  Let us know in our comments section below or on our Facebook page.