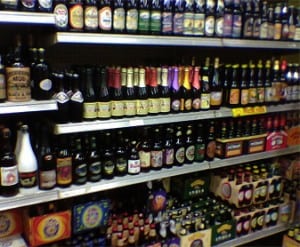 There could be a great many things that are tipping their hat to just how auspicious the Real Ale industry is looking right now.   In the last four years microbreweries have been on the rise and some have received huge media notoriety.  A top British comedian chanting “all hail the ale” to packed audiences who’d previously never even considered ale as an option. Perhaps the rebirth of British tradition and all things British thanks to national events such as the Royal Wedding. Then there’s the reacceptance of cider as ‘hip and trendy’ by drinkers on their search for an alternative ‘hip and trendy’ beverage. As a nation we’re also much more environmental, we actively look for greener or locally sourced produce, it’s fashionable.  But don’t shun consumerism entirely; Real Ale popularity could also be attributed to the extension of Real Ale shelves in supermarkets and greater exposure by supermarkets to new or potential Real Ale drinkers.

Cast off your criticism for a second about how supermarket Real Ale is not ‘Real Ale’ due to its conditioning.  Two of the biggest supermarkets in the UK have reported rises in Real Ale sales for the past three years.  And let’s be honest, those supermarket Real Ale shelves (back from extinction) look physically attractive with their adorning decorative, embossed, gold trim labels telling stories as if each bottle was a novel, tales of dragons, kings, goblins, knights, bulldogs, ferrets, badgers, and bananas(?) to name a few. You don’t get that spirit of tradition or spark of imagination when you walk through the repetitive, uniform, imported fizz keg aisle.  Despite Camra’s ranting that supermarket booze is destroying the economy of pubs, Real Ale in supermarkets is cheap, if you want to try something different and you don’t like it, your wallet is not damaged in the process of you enjoying yourself.

So, supermarket Real Ale could be the first step in a blossoming affair with ale for some men and women, who will hopefully pass on the baton of responsibility to their sons/ daughters, keeping the tradition of British Real Ale alive for years to come.  It is though, probably down to consumerist attitude, people buy more Real Ale in the moments fad, and supermarkets reflect our desires with bigger and wider stocks.  This could then switch to an adverse effect as we become so aware of real ale that we become uninterested in it and ale once again begins to disappear from shelves, … sparking another “bring back the ale” campaign and so, the dog begins to chase it’s tail once more.