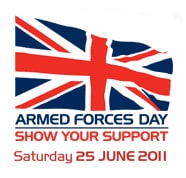 Saturday 25th June 2011 is Armed Forces Day in the UK, an opportunity for the nation to show it’s support for all those men and women who make up the British armed forces.  The 2011 national event is to be held in Edinburgh although there will be many more events being held up and down the country.  The Armed Forces Day website has a useful events page highlighting events that may be taking part in your local area (Armed Forces Day Events click here).

The armed forces defend the UK and it’s interests, working around the world to bring peace to troubled nations, tackling drug smuggling, piracy, combating terrorism and delivering aid or protection to those who need it most.  The main objective of the armed forces is currently focused on restoring order in Afghanistan and reducing the grip of power that the Taliban have over certain provinces within the country.  Good news indeed that only today William Hague the UK Foreign Secretary announced that Britain was in key peace talks with the Taliban, this could mean that some of our UK forces serving in Afghanistan will be home before the planned 2015 withdrawal. (Sources, SkyNews, This is London.)

The Americans have been supporting Armed Forces Day since just after the second world war (1949), but the event is still relatively new to the UK, replacing Veterans Day in 2009, but it’s also a time to reflect on the service that those veterans have given to our great nation, and the personal sacrifice  that so many brave men and women have given to defend Britain and her interests.

If you’d like to read more information about armed Forces Day you can do so by visiting the Armed Forces Day website. If you are attending an Armed Forces Day event let us know by either posting in our comments section below, or by joining the conversation on our Facebook page. Cheers!