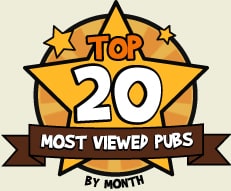 We’ve launched another new feature on BITE today! You can now view the most viewed pubs by month on the main site. We’ve also backdated it to the start of 2011.

Shortly after the start of each month you will be able to see the previous month’s busiest pubs on BITE. There are also ranking indicators for each month to show you where they were compared to last month.

BITE has always been a London-heavy pub guide and the stats show just that. In January 2011, The Harp was #4 in our Top 20 pubs, by February it had got the #1 spot and it kept it throughout March too. Only one pub managed to get in during January and February from outside of London, that was The Dolphin in Plymouth. In March however a second pub, The Crown Inn from Stockport crept in – will it manage to stay in there until the end of April though?

By the end of the Summer we might see countryside pubs make it into the Top 20 from all their BBQ’s and Summer events.. Talking of BBQ’s… we should be able to help you plan those a little easier from Friday… more details soon!

To visit the Most Viewed Pubs by Month, simply click here or follow the link in the left hand menu on BITE.