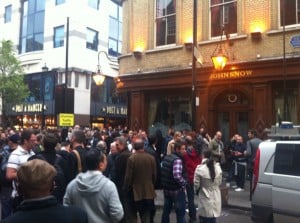 Who’d have thought a simple act of a kiss would cause so much controversy? Back last Wednesday when Jonathan Williams and James Bull decided to have a kiss in the pub, The John Snow, they were ejected by the landlord. Now we don’t need to repeat the news to you, it’s covered in plenty of detail here and here, also here and here! As you know, a Gay Kiss-In was organised via Facebook and Twitter for everyone to turn up at 7pm at the John Snow and kiss.

The pub decided to deal with it by shutting its doors and turfing everyone out a couple of hours beforehand. This drew more news reports and tweets about it and the number of people visiting the John Snow page on BITE rocketed. The pub page had the same amount of traffic to it in 4 hours as it usually gets in two months! With that unfortunately came a barrage of comments – but, and this is the whole point of this article: the majority of them were not publishable by us because they were offensive. People on both sides of the argument were submitting comments and direct messages to us that you wouldn’t want your mother to hear! This is all well and good, people in the heat of the moment, etc. But then when the dust settles and they move onto something else, we’re left to deal with the flak from a lawsuit or the police for hosting offensive material.

See, we’re stuck in an odd position. We want to run a non-bias website about pubs. We want you guys to say which are the good and the bad ones – that’s fine. Unfortunately, some people can’t follow our guidelines and they submit comments which you just cannot publish.

We totally agree with Jonathan and James about the incident and don’t believe they should have been kicked out either. But, please guys – remember what you are putting when you submit reviews. It has to be truthful and can be backed up otherwise we can’t publish it. It’s not that we’re taking a stance on whether the pub is right and you are wrong or not.

Now enjoy your first Bank Holiday week of the year and get to some pubs! 🙂