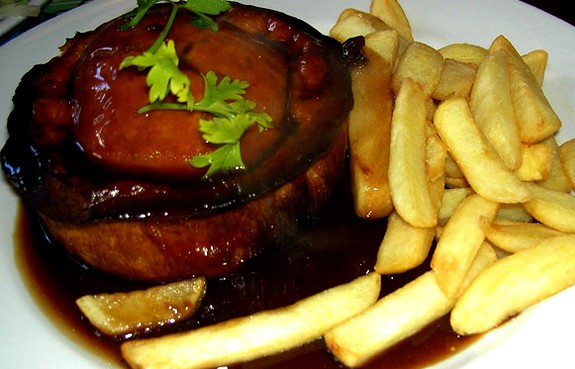 It’s British Pie Week from the 5th to the 11th March (2012), earlier this year we posted about National Pie Day, so if you’re interested in some quick pie-related facts check out our previous blog post here.

The British Pie Week website (hosted by General Mills Inc.) has announced their “Pub Pie Champion for 2012”.  Drum roll… It’s (chef) hats off to Carol Haime at The Sandrock, Farnham, with a delicious “Wheatley House Pheasant Pie with baby parsnips, juniper and a poppy seed and rock salt crust!” Becoming the first woman to win the competition, Carol said “It’s fantastic to have won! I don’t think it’s really sunk in yet. The whole team is delighted and we’re really looking forward to celebrating during British Pie Week.”
(Source www.britishpieweek.com. The recipie for Carol’s winning pie is also available here.)


The marriage between pies and British pubs is long standing and legendary, searching the comments on BITE we discovered the following pie’scentric pubs recommended by you, our users. These pubs have gone to greater lengths to produce pies worthy of our attention as pub patrons. (Pub suggestions are based on pub-page activity within the last 12 months.)

The Brie Louise, Euston, London: While the reviews from users who have dined on The Brie’s pies seem mixed, there’s no mistaking that The Brie has won awards for it’s skills in pie making. Their Steak & Kidney pie is a crowning achievement  having scooped three consecutive annual awards, a medal has also been pinned on their seasonal Turkey, Cranberry & Stuffing pie (only available in the winter months).   The Brie Louise offers a decent range of home cooked pies, including vegetarian and fish options.

Sweeney & Todd, Reading: The sign above the door blazons the title ‘Famous Pies, Famous Ales’. Knowing the story of Sweeney Todd and the recent findings that his murderous antics were no urban myth, we’re curious as to what ingredients are used in the Sweeney’s pies… Corporate bankers? Estate agents? Expense swindling Politicians? Jokes aside, the Sweeney & Todd boasts what we all want in a pub – friendly staff, reasonably priced well stocked real ales, and a curious selection of pie fillings, … Hare & Cherry anyone? The Sweeney & Todd pie fillings cater to both meat lovers and vegetarians alike.

The Raven, Bath: Described as a “hidden gem”, The Raven in Bath offers a wide selection of ever changing pie fillings, it all depends on which season you find yourself musing their menu. Classic ingredients, such as pork, steak, lamb are all locally sourced, with vegetarian options that may even tempt a browsing carnivore. The Raven also has it’s own specially brewed Real Ale (Raven Ale), when pubs go that extra yard and get it right, The Raven, Bath is worth mentioning.

The Prince of Wales, Ledbury: Tucked away off the Ledbury High-Street, the Prince of Wales is a proper old-fashioned British boozer.  With a relaxed, ambient, atmosphere it’s the perfect setting to sit back, enjoy a real ale from their wide selection and tuck into an enormous portion of their home cooked pie.  Check out their pie board when entering, it’s ever changing with the seasons, the Prince’s pies are baked using locally sourced ingredients.

The Kenton, Homerton, London: It’s a coin-toss about this entry, granted The Kenton doesn’t bake it’s own pies.  However, by word-of-mouth the quality of the Pieminister pies served at The Kenton has reached us on a number of occasions while hunger struck and wandering in Hackney.  This Norwegian run, grand, Victorian pub caters for all tastes, that means you, vegetarians and fussy eaters. The ‘Minty Lamb Pie’ is always a firm favourite to expel those stomach-rumbles, with nice selection of ales to accompany any pie you chose.

Just to finish off, The Angel at Stoke by Nayland, Colchester is offering a special pie and pint menu between the 5th and 11th of March, everyday a choice of pies will be on the menu, baked to perfection by The Angel’s resident top chef.  Booking during British Pie Week (5th – 11th March) is advisable so you can be guaranteed a piece of the pie(s).

If you’ve a favourite pie filling, a recipe for pie success or you know of a pub worth mentioning for it’s culinary pie abilities do let us know in our comments section below or by joining the conversation on our Facebook page.