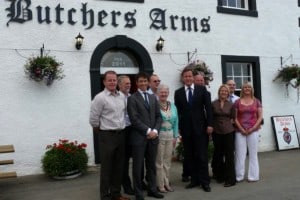 There were reports earlier this year that pub closures have slowed to 25 per week in the UK, although this figure is less than in previous years, it’s still grave news for the industry with local pubs still effectively being the hub of local social life.  So, it’s nice to hear a hearty tale once in a while… Locals in Crosby near Penrith have clubbed together to save their local, The Butchers Arms. The pub, which has been closed for 6 months has now been resurrected by local shareholders, some 300 people investing in shares of £250 (minimum) and raising around £300,000.   With new Landlords Kev Taylor and Bev Percy at the helm, they have been quoted as saying “We have been amazed by the dedication and efforts of the community and volunteers” (source BBC News).

The Butchers Arms will – through the dedication of it’s local community no doubt continue to flourish. The co-operative purchase model could well be that the future of local pubs-in-need, turning to their local communities for financial support. Prime Minister David Cameron even visited The Butchers Arms keen to promote the local community spirit as part of his plans to rebuild British society in the wake of the abysmal rioting. You can read the full story on the Lyvennet Community Pub website.

The Butchers Arms is the not the only co-operative owned pub in the county, The Old Crown at Hesket was purchased by more  than 100 locals in a similar deal.

If you’ve any comments you’d like to add about The Butchers Arms you can do so in our comments section below or join in the conversation on our Facebook page.