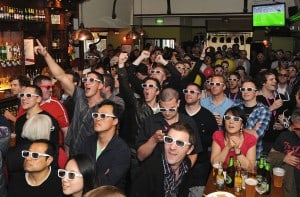 Last year in 2010 The Publicans Morning Advertiser reported how 20 pubs under ownership of the Town and City Pub Company (owners of Yates, Slug and Lettuce and Hogshead)  were to receive Sky 3D TV packages so that pub patrons could enjoy ‘the beautiful game’ with an extra third dimension. Initial reactions were promising, punters noting how close-up shots proved how good the depth of field is with the new technology.  The only grievances from pub goers seemed to be that pubs need bigger screens to take full control of the medium, and that after 90 minutes of 3D TV your eyes could be a little sore.

3D throughout 2011 has truly begun to invade cinematography, computer-gaming and is now even affordable and available for homes, it seems to be less and less of a gimmick and possibly the new format for visual entertainment moving forward through this decade.  Earlier this year (June 2011) The Publicans Morning Advertiser  also reported an increase to some 2000 pubs offering the 3d experience.  Punch Taverns managed brands ‘Original Pub Company’ and ‘John Barras’ are among the first to embrace the new way of watching TV by installing the Cinema 3D Pub Pack from LG Electronics, reporting rises in sales during sports matches shown in 3D.

With the Barclays Premiereship 2011 season officially starting on Saturday 13th August, the iron is hot for pubs to embrace this new unparalleled technology.   Have any BITE users watched 3D TV in the local pubs? What are your thoughts on the new way of watching TV, does the third dimension add that extra spark? Or does it make it easy to spill your pint?  If you’ve any comments feel free to leave them in our comments section bel0w, or join in the conversation on our Facebook page.

In a conflict of interests though it is quite important to mention that last year in 2010 Samsung the electronics giant  released a press statement warning against the dangers of watching 3D TV whilst under the influence of alcohol, you can read the full story here on CBS News website.

You can use the Sky website to search for pubs that have Sky 3D TV. Cheers!