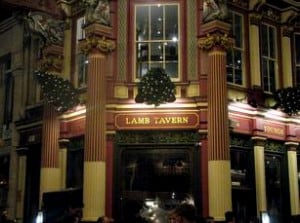 After the heart breaking news to our blog team that the Mos Eisley Space Port Tavern in Star Wars IV was actually entirely studio set and not one brick of it a real pub/bar, we’ve decided to put together  a quick list of Great British pubs that have appeared in films.  These are the famous pubs, the ones that made it, and if you are ever in the presence of a famous pub – you should try to act normal, don’t ask for their autograph – famous pubs don’t like that sort of thing you know.

The Jackdaw – Canterbury, Kent features in the 1969 film “The Battle of Britain”,  Squadron Leader Colin Harvey (played by Christopher Plummer) meets his love – Section Officer Maggie Harvey (played by  Susannah York) for a drink and attempts to talk her into moving to Scotland.  (While the Battle of Britain was fought in the skies over this pub, the pub noted for serving the brave Airmen during WWII is the Plough in Shepreth, we posted about it in “Raise a glass to the Few” earlier this year.)

The Beehive – Buntingford, Herts appears in the 2005 movie “Hitchhikers Guide to the Galaxy”, Ford Prefect (played by Mos Def) reveals to Arthur Dent (played by Martin Freeman) that he is from another planet, and Earth’s future has been scheduled to be flattened for an intergalactic super highway.

The Black Swan – Matyr’s Green, Surrey was renamed “The Slaughtered Lamb” for it’s appearance in the 1981 classic “An American Werewolf in London”.  After a very frosty reception in the Slaughtered Lamb pub by two Americans, David (played by David Naughton) and Jack (played by Griffin Dunne), the two travellers venture off onto the moors, and as the film title suggests, there is a werewolf involved.

The Sailsbury, Leicester Square, London appears in a few scenes in the Victim (1961).  A film way ahead of it’s time, The Salisbury was used effectively as the focal point of the film’s homosexual community.  A story of blackmail and social issues, it’s just as relevant today as it was when it was first filmed.

The Red Lion, Avebury, Wiltshire appears at the end of the cult film “Still Crazy” (1989), the story of Strange Fruit, the rock band who had it all, lost it, became normal everyday people, and then during middle age attempt to make a comeback.

The Duke of Albany – New Cross, London provides the external shots of The Winchester pub during the zombie stand off in “Shaun of the Dead” (2004).  The main cast featuring the duo Simon Pegg and Nick Frost hold up in the pub while outside hordes of zombies congregate, Pegg gives a notable speech about wanting to be in a familiar, safe environment… the pub.

The Pavillion – Battersea, London appears in the 1968 social drama “Up the Junction”. A rich girl from Chelsea (played by Suzy Kendall) gives up her lavish life and tries to make it on her on in the (then) slums of Battersea.

The Lamb Tavern – Leadenhall Market, London provides the back drop for a fight scene in the 1975 movie “Brannigan”. Jim Brannigan (played by John Wayne) brings his own kind of American/Irish Justice to the streets of London. Commander Swann (played by Richard Attenborough) continues to batter Brannigan in a very true upper class British way that the use of hand-guns on British streets is forbidden by the police force.

If you know of a famous pub used in a film, or your local has appeared in a movie – let us know in our comments section below, or by joining in the conversation on our Facebook page. Cheers!