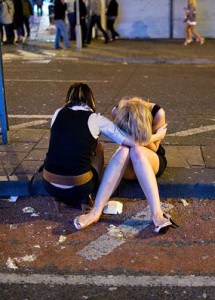 Imagine yourself strolling down the Tottenham Court Road, you notice a young lady, bedraggled, slumped down against a wall, she smells of alcohol, her skirt is hitched up, she’s wiping vomit out of her hair, as you pass her by she offers to keep you company for the night, as you decline – her demeanour alters into a torrent of abuse.  It’s 1792, and you’re experiencing ‘Booze Britain’ as it was then.  The popularity of London’s Gin Palaces caused them to blossom like dandelions through the captial, the greed of landowners selling their grain to make the gin – pushed London’s lower classes into a frenzy of drinking, cheap, super strength alcohol from penny drams.  Life had become so seemingly tragic, intolerable and impoverished for the unfortunate and forgotten souls of London’s streets during the 18th Century, drinking was all they had to look forward to. In fact it was probably all they lived for, a daily abyssal blackout under the slogan “get drunk for a penny, dead drunk for tuppence, straw is free” (straw bed to pass out on). 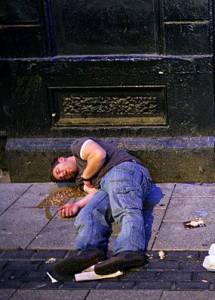 On the high street of Cardiff (imagine you are once again strolling), from a pile of rubbish a man soaked in his own urine and vomit waves a pathetic limp hand at you beckoning you to engage in a fight with him, staggering women pass by flashing their underwear and cursing like sailors.  It’s 2011 and you’re in one of the visions of Booze Britain as it is today.  Up and down the country the image is the same, the weekend sees A&E wards, often policed, overflowing with revellers so drunk they lose all inhibition, anything goes which usually concludes in abusive behaviour, or even worse – extreme violence.

Britain has again shifted into an epidemic of drunkenness, and supposedly for the same silly reasons as the 18th Century, cheap, strong booze, made readily available, pushed onto the consumers by greedy profit hunters.
But, if we’re not blaming supermarkets, we’re blaming the lack of family structure, absence of adequate piers, social pressures such as unemployment, poverty, ladette culture, 24 hour drinking laws, … and when those reasons are disregarded no doubt other equivocal reasons would be pushed upon us as fact.

Could it be that British people simply like to get drunk?  The French and Spanish have their love of wine, the Germans and Belgians their love of beer, but we British seemed to love the poisonous merriment. Saturday night in any town is like a festival in honour of Dionysus, but it’s just one image of what Booze Britain really is, behind closed doors many thousands more are drinking to get drunk. The extent of Britain’s boozing is not just limited to the youth who publicly humiliate themselves on our streets, mature drinkers tend to consume harder alcohol, super strength lager and neat spirits. Business professionals drink bottles and bottles of wine each day to relieve stress, underage drinkers seem to be simply bored of life, or following in their parent(s) footsteps.  Our coalition government has recently banned the sale of cheap alcohol, a can of lager can be sold for no less than 38p, a bottle of wine for no less than £2.03, a litre of vodka for no less than £10.21, but is this clamp down enough?

What more could be done? “Booze Britain” it’s a tough subject that is not necessarily solved by one action. If you’ve any thoughts on Booze Britain, how it’s effecting you or your local area do let us know in our comments section below or by leaving a reply on our Facebook page.  We do really appreciate all of your comments and we will be using them in our future posts.