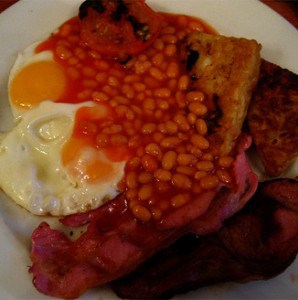 Another week starts and the antics of the weekend are just memories, you skipped breakfast and opted for the extra 10 minutes in bed to ease the burden of a new week.  You need to refuel, but where? The Pub?

A Pub for breakfast? For some of us that’s like returning to the scene of the crime, any slight smell of beer could turn your stomach inside out, and you promised that you’d never drink again right?  Could you cut through the scent of floor cleaner and musty spilt alcohol to tuck into a fry up, or some porridge, toast and coffee?

It’s been just over a year since leading pub chain Wetherspoons announced that they were opening their doors to customers at 7am to entice them in for breakfast.  Immediate thoughts from Internet users in March 2010 were mixed, but Wetherspoons are now reportedly selling 400,000 breakfasts a week (that’s a staggering 20 million breakfasts a year), accompanied by 600,000 cups of coffee making them one of the biggest coffee shops in the UK.
Their success could be attributed to their size as a chain but for the independent local pub or small chain it might not be convenient or profitable to open your doors for only a small trickle of customers, but love them or hate them it’s definitely a scheme that is working for Wetherspoons.

Would you consider having breakfast in a pub?  Is it something you regularly do or have done?  As usual let us know by answering the poll below or having a rant on our Facebook page or in our comments section below.